I’ve been thinking about this one for a couple of months.  My friend Lisa has been after me to write something about wheat berries.  She says it’s one of her favorite “health-food” things.  The term “wheat berry” refers to the entire kernel of wheat except for the hull.  That means the bran, the germ, and the endosperm.  They can be toasted and sprinkled over salads, soaked and sauteed with an Asian slant–garlic, ginger, soy, scallion, and sesame see oil–and done lots of other ways, many of which come out looking and tasting a bit like health food.  That’s good for me, but I think the term “health food” can put some people off (you know, those “meat-and-potatoes” kind of people).  You can get wheat berries at most health food stores, just don’t tell anyone.

I’m going to do here is introduce wheat berries to you in a luscious dessert, one that is perfect for this kind of weather, because this one will taste absolutely yummy served warm. And who doesn’t like a nice warm dessert?  The pudding is a lot like rice or tapioca pudding, but the berries make a nice different flavor. 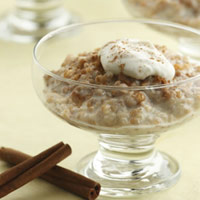 Sort through the wheat berries carefully, looking for small stones, discard if you find any.  Rinse well, and then place the berries in a large heavy saucepan, and add water to cover by 2 inches.  Bring to a boil, reduce the heat to medium-low, cover and simmer, adding more water if necessary, until the wheat berries are tender, about an hour.  Drain well.

Combine the chopped wheat berries, the remaining milk, cinnamon stick, orange zest, and salt in a large heavy pot, bring to a boil, then reduce the  heat to medium-low and cook, stirring often to prevent sticking, until the mixture is thick, 25-30 minutes.  Remove from the heat, discard the cinnamon stick and orange zest, and stir in the maple syrup and vanilla.

Serve warm or chilled with a light drizzle of maple syrup and a sprinkle of ground cinnamon, and perhaps a dollop of maple yogurt, if desired.  If the pudding gets too thick as it stands, stir in a bit of milk.

Lancaster Eats highlights the best resources our community has to offer. From farmers to markets to vendors to retailers, we highlight those members of our wonderful food community who are striving to improve the presence of the commercial and retail food industry for all the citizens of Lancaster. The food we eat and drink is important to every single one of us, and we believe that everyone is entitled to safe and healthy food and drink. We hope to engage the citizens of our city and county who care about the food we eat and the environment in which we live. We know there are many people in the community who are doing wonderful things that benefit the people of Lancaster, as customers and consumers. We hope you will let us know who they are so that we can learn and inform those who eat and drink. That, as we know, is all of us. We are all in this together. Let's build a community.
View all posts by Jeffrey Thal »

Posted on August 6, 2012, in Uncategorized. Bookmark the permalink. Leave a comment.