“As Good As Risotto” Israeli Couscous and Peas and Parmesan

Life on the run. 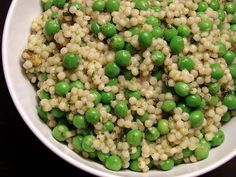 If you’re like me, however, you still refuse to succumb to the lure of mac & cheese from a box for dinner.  I simply refuse.

The kids are annoyed at me all the time, because I cook.  I want dinner, with the whole family sitting around the dinner table, to be something that they remember when they grow up and have kids of their own.  I want them to be healthy.  I want them to be interested in trying new things.  I want them to appreciate the effort that E and I put into giving them the best daily experience they can have, whether they appreciate it now, or later, or maybe never, but I truly don’t think that last will come to pass.

Sure, occasionally, dinner can be baked beans from a can and browned hot dogs on white bread, on a day when L has mid-terms and chorus rehearsal and a voice lesson; and M has after-school enrichment and swim practice and an evening hockey game; and E has a meeting at  eight am in Elizabethtown and a lunch meeting with a donor downtown and a planning session for the golf tournament at five pm in New Holland; and I’m driving up and down 501 four times in an afternoon and I’m on call for jury duty in Philadelphia; and … and … and …

I know you all can relate.

Still, the kids deserve a home-cooked meal, even if they don’t think they deserve it and only want mac & cheese and chocolate milk for dinner.

And I do love to cook.

So in that spirit, and with lots to do, I still wanted to conjure up something that looked like–and felt like–effort.

What resulted was a dinner of baked (turkey) ham pinned with whole cloves and slathered with brown sugar and Dijon mustard, cooked over a water bath of ginger beer and liquid smoke (took five minutes to prepare, then 75 minutes in a 325-degree oven); fresh green beans (trimmed and sauteed in olive oil and sliced almonds–took more time than the turkey ham by about three minutes); and something inspired by a recipe I found on the Internet–Israeli  couscous with peas.  This one sounds like a production, but actually it was amazingly simple and garnered applause and demands for seconds.  Will wonders never cease?

The Israeli couscous product was–in my mind, anyway–as good as risotto, and so simple that you need to try it. Took me all of six minutes of effort and 15 minutes start to finish, with the most amazing result.

Want to make risotto without the muss and the fuss?

Israeli Couscous With Peas and Parmesan 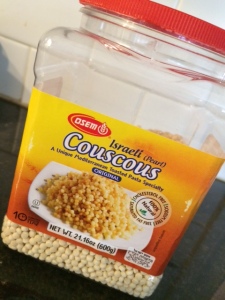 1.  Heat the oil or butter in a medium-sized heavy pot over medium-high heat.  Add the couscous and cook, stirring constantly, until it starts to brown; 3-5 minutes.

2.  Add the peas and broth and bring to a boil.  Reduce the heat to a simmer, cover, and cook until the broth is absorbed and the couscous is tender; 10-12 minutes.

3.  Add the salt and pepper, stir well, then add the Parmesan cheese and stir constantly until the cheese is melted and fully incorporated.

Garnish with a little chopped parsley and serve immediately.

Lancaster Eats highlights the best resources our community has to offer. From farmers to markets to vendors to retailers, we highlight those members of our wonderful food community who are striving to improve the presence of the commercial and retail food industry for all the citizens of Lancaster. The food we eat and drink is important to every single one of us, and we believe that everyone is entitled to safe and healthy food and drink. We hope to engage the citizens of our city and county who care about the food we eat and the environment in which we live. We know there are many people in the community who are doing wonderful things that benefit the people of Lancaster, as customers and consumers. We hope you will let us know who they are so that we can learn and inform those who eat and drink. That, as we know, is all of us. We are all in this together. Let's build a community.
View all posts by Jeffrey Thal »